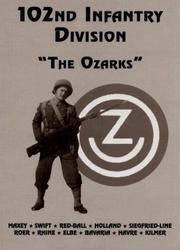 History, d Infantry Division, USAR. A short pocket history of the nd Infantry Division printed by the division in the late s or early s. HISTORY D INFANTRY DIVISION USAR THE OZARK PATCH A large, golden "O" on a field of blue. Within the "O" is the letter "Z," from which is suspended an arc, both the letter and the arc being in. The nd Infantry Division arrived at Cherbourg, France, 23 September , and, after a short period of training near Valognes, moved to the German-Netherlands border. On 26 October, elements attached to other divisions entered combat and on 3 November the Division assumed responsibility for the sector from the Wurm River to Waurichen. On 23 February , the d attacked across the Roer (→ Operation Grenade), advanced toward Lövenich and Erkelenz, bypassed Mönchengladbach, took Krefeld, 3 March, and reached the Rhine. During March the division was on the defensive along the Rhine, its sector extending from Homburg south to Düsseldorf. World War, -- Regimental histories -- United States -- d Division, World War, -- Campaigns -- Germany Publisher Washington, Infantry Journal Press.